"...good for everyone liking the 'oldschool' way of language learning." 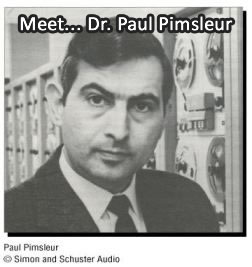 For over forty years people have been using the Pimsleur learning system to learn foreign languages. This system which was developed by Dr. Paul Pimsleur during the 1960s contains innovative features that have since been incorporated into many other language learning courses. But is the Pimsleur approach still a good way to learn a new language?

This review will seek to answer that question. As you will see below, while the Pimsleur approach has many strengths it also has some serious faults that buyers need to know about. Given the high price tag attached to Pimsleur courses these disadvantages should be given careful consideration before purchasing.

How does the Pimsleur Approach work?

There are five main components. These are:

Each language that you learn with the Pimsleur approach has different levels, from beginner through to advanced. There is also the option to purchase either the physical CD course or the downloadable MP3 version. Typically a single level of the Pimsleur approach will cost $345 for the physical CD version and $119.95 for the MP3 version. The material contained in the two courses is the same and so for most people purchasing the MP3 version will be preferable.

If you are looking for a well tested, audio based learning system then Pimsleur course's are a good option. However in my opinion the language learning market has moved on since the courses were developed in the 1960's.

Many of the features that once made Pimsleur so successful have now been incorporated into other learning systems such as Rocket languages (review), which is considerably less expensive. Given that many language courses now include video tutorials, social learning, games, quizzes and complete grammar lessons, the Pimsleur system often seems very overpriced.

Overall Pimsleur is based on solid, language teaching principles but not the course I would recommend unless you are specifically looking to learn using this approach.