"A lot less boring, but like Rosetta Stone, can feel overly repetitive." 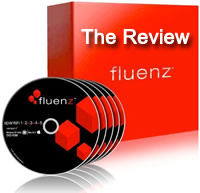 Anyone who's ever tried to learn a language from home can tell you how difficult it can be. Yet software has been making it easier for many years now.

However, not all is well among the experts. There is no clear consensus on how best to learn a language, with opinion differing wildly on the best method to use; depending on who you speak to. There's basically two main schools of thought as to how the language software should train the mind.

There's the immersive, which involves totally immersing the user into a language, and learning to navigate it by instinct alone. Then there's the instructional, that gives the user clear grammatical rules, context and direction.

Fluenz promises to do a little a both. It promises much of the former immersion, with enough of the latter to be able to make sense of what's going on. In this Fluenz review, we'll take a look at how well they've managed to pull it off.

So why would you need Fluenz?

One of the most popular language programs available on the market today is the Rosetta Stone software. You may read my review here. Many people claim to have been helped to learn a language using this software. Yet many others have complained that they cannot make sense of it. This is because the Rosetta Stone, teaches the user in the way in which a child will learn its native tongue. It teaches by repetition and instinct alone. Often giving the user a choice of four pictures or words, and leaving it to the user to click the right one. You might quickly learn the phrase "A boy with a dog", but what good is that really? It can take a long, long time with Rosetta Stone before you're getting to the useful parts.

The single biggest thing that many people struggle with is the lack of context. We are not children, we do not learn like children do. When we are in our formative years, our brains change dramatically. As adults we have already fully-developed brains, habits, speech and reading ability. It's therefore a little unreasonable to expect me all to learn a whole new language as a child. Though Rosetta Stone is undoubtedly great when used in conjunction with other methods, for many people it's simply not good enough alone.

Fluenz credits its users with intelligence. It takes a look at each individual language, and looks closely at where people commonly struggle. Though the program uses a little instinct and a lot of repetition, it uses it in a way that makes sense to most people.

So how does it differ from other similar programs?

Fluenz doesn't throw you in at the deep end. Expecting you to sink or swim. Though it's very similar at times in it's methods to Rosetta Stone, it gives clear instructions in English, whether you are learning French (my review), Spanish (here's my review of Fluenz Spanish Latin America and here's the review of the Spain version), Italian(my review) or another language. That's right, you get your own virtual instructor. Rather than just a selection of images. And these lessons are aimed at getting to the heart of what English people struggle with, when it comes to new languages. Because not all languages are the same. It's not only the words that differ, but the grammar rules as well. It's not just the characters of the alphabet that may differ, but the way in which they are pronounced. An English speaking person may have much greater difficulty with learning Italian than a Spanish speaking person. Fluenz looks at the issues commonly encountered, and tailors its lessons accordingly.

Lessons are kept interesting. One thing that will strike you when using Rosetta Stone is the blandness of its interface. It can be very dull. With Fluenz you are learning from a person who you can clearly see mouth the words. In both English and in your chosen language. There's also views of beautiful places and other images available. It keeps you wanting to view the screen, rather than feeling like you're being punished by being forced to write lines on a chalkboard. Words float around the screen into the palms of the instructors hands. It just looks so much more polished and aesthetically pleasing.

So is it worth the money?

The amount of work that's gone into the software is worth more than many other programs. Whereas many programs use the same method over and over again for many different languages, Fluenz tailors each lesson specifically for the different languages.

Though Fluenz is a premium priced, comprehensive language learning software, you get the impression that much more money from sales has been put back into the software. Rather than concentrating on marketing. Which means the product has gone from strength to strength.

It's still at the pricey end of the market, but for what you get it's good value for money.

Who is it aimed at?

It's aimed at the person who wishes to totally learn a new language, rather than just a few helpful phrases. It's also great for those people who have tried Rosetta Stone, and didn't learn more than a few words and basic phrases after many hours of trying.

If you feel that clicking pictures on a screen for many hours with no context given is unhelpful, then this is for you. In many ways, Rosetta Stone showed the world how it could be done. This product takes it to another level, and holds the user's hand rather than expecting them to wander wildly through it.

Are there any flaws?

Sure, there's flaws. For one thing its methods can still suffer from a lack of clear grammatical rules. Though you will learn phrases well, and get the gist of the language, it can be more difficult to learn to construct your own sentences.

Also, like Rosetta Stone it can feel overly repetitive. Going over old ground too often when it should instead be moving onto something new.

Fluenz comes highly recommended. It's extremely polished and well presented, and it can be a lot less boring than most other language learning software available at the moment. Many people are learning through using this software after they did not entirely get along with others. However, others are still much better at giving clear context to the lessons than its main rival. That's the reason why I rated it with only 4 stars instead of giving it the full 5.