"Solid audio course, without the interactivity." 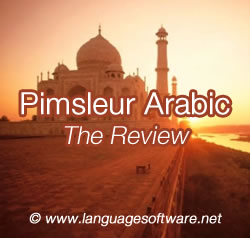 Arabic can be one of the hardest languages to master. This is not only because of its unique alphabet and grammar structure, but also because of the multiplicity of Arabic dialects spoken. Pimsleur offers one of the best solutions to this problem by offering three different Arabic language learning courses. Each of the courses use the highly regarded Pimsleur method to teach Arabic in a faster and easy to learn way.

In this review we will look at whether or not the Pimsleur method works for a language as seemingly complex as Arabic is. Below you will find some of the key advantages and disadvantages of these Arabic language learning courses. You will also find out if Pimsleur Arabic offers the best value for money or if there are better options available. Finally you can find our overall recommendation for these three Pimsleur Arabic courses.

What is the difference between MSA, Egyptian, and Eastern Arabic?

If you are new to learning Arabic it might seem a little strange that Pimsleur is offering three different language courses teaching what is essentially the same language. After all there are many languages such as French or Spanish which are spoken in multiple countries, but there isn't separate courses for each. However, the difference between Modern Standard Arabic (MSA) and localized dialects such as Eastern Arabic and Egyptian Arabic is huge. If you want to be clearly understood and not laughed at, then it pays to learn the right form of Arabic.

If you are planning a trip to Egypt then you want to use the Pimsleur Egyptian Arabic course. Egyptian Arabic is spoken in cities throughout Egypt. Also because of its use by movie actors it is widely understood across the Arab world. Finally Eastern Arabic is the dialect which is spoken in Jordan, Palestine, Syria, and Lebanon. Eastern Arabic is also a very useful dialectic to learn because it is understood by many people in Iraq, Saudia Arabia, and gulf region.

What is The Pimsleur Method?

The Pimsleur Method was developed Dr Paul Pimsleur in the late 1960's to make it easier for people to learn a new language. The Pimsleur Method is based on four key principles. The first of these is spaced repetition, which means that new words and phrase are repeated in increasing intervals. So for example the first time you hear a new word it might be repeated two minutes later, the next time it would be ten minutes later and then half an hour after that. This is the optimal way to memorize new information.

The second principle is core vocabulary. All languages have a core vocabulary which if you learn is enough to hold basic conversations and be understood. The Pimsleur Approach does not waste time on words that you will infrequently use. The third principle is anticipation. The Pimsleur Method ask you to translate a particular phrase or word, gives you time to say it, and then reinforces the correct word or phrase. As your mind becomes trained to expect to have to speak words and phrases you become laser focused on learning. Lastly there is the principle of organic learning. All of the words and phrases introduced in your course are placed inside of the context of a conversation.

There are three different levels of Pimsleur Spanish that you can choose from, these are:

The Pimsleur method does deliver on its promises: Learning Arabic with these courses is fast, fun, and effective. Unlike many other products that try and teach Arabic you can get started straight away and there is no boring rote learning or memorization. Pimsleur have also done a good job of providing a comprehensive coverage of Arabic by offering three separate courses. This is a smart decision that other language company's should consider duplicating.

But this is not to say that the Pimsleur Arabic Courses are perfect. They are expensive, possibly even overpriced, at three times the cost of Rocket Arabic which is a perfectly good substitute. And if you don't like the audio only approach then Pimsleur Arabic isn't going to work for you. Overall Pimsleur Arabic does do what it say it will, but given the price it would be well worth looking at the advantages of trying out a less expensive and more comprehensive software course such as Rocket Arabic before you commit to buying.